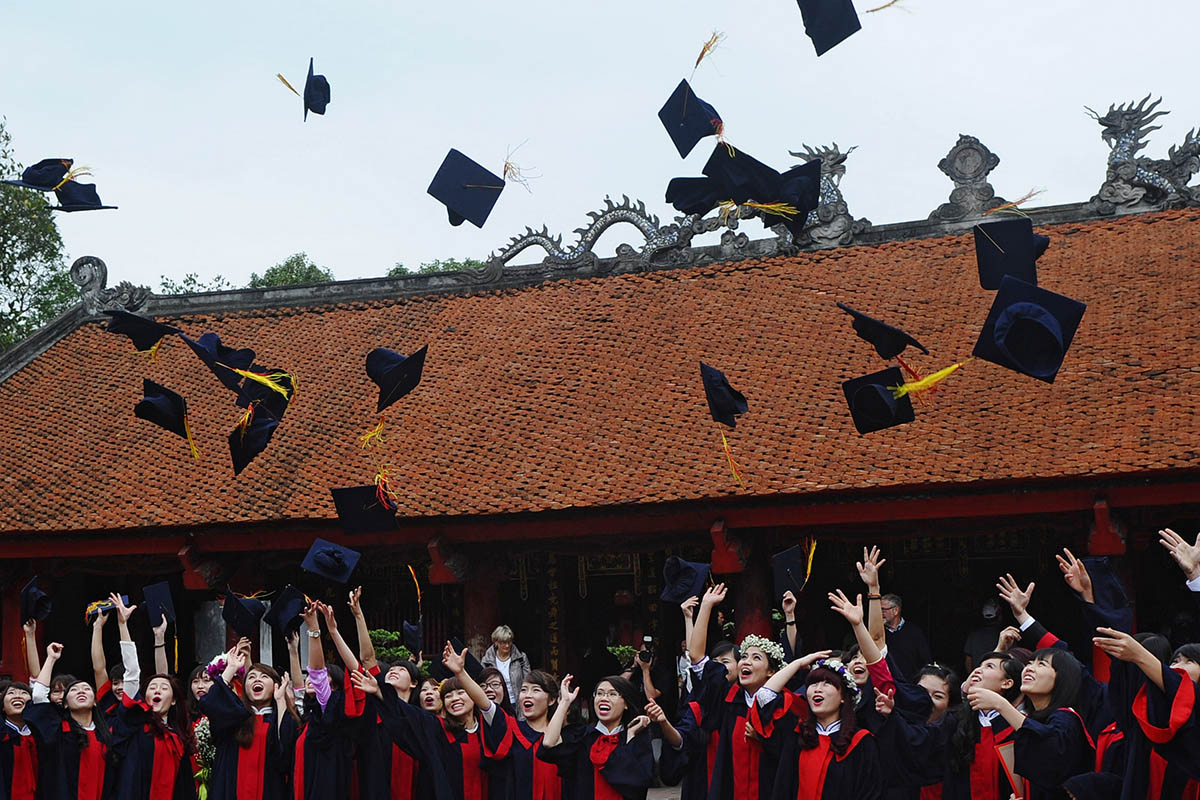 Students from a local college celebrate their graduation at the Temple of Literature in Hanoi on November 18, 2014. (AFP Photo/Hoang Dinh Nam)

A more resilient cross-border education system with more involvement between institutions in different countries, could be the key to realising the economic and political aspirations of the Association of Southeast Asian Nations (ASEAN).

Regionalisation of higher learning has a pivotal role to play in the community building process according to panellists at a forum organised by SEA Junction and the Heinrich Boell Foundation Southeast Asia in November, last year.

“ASEAN plans to enhance the quality of human resources in the region and forming a regional identity, while contributing to economic growth. Among the various action plans set out at the 14th ASEAN Summit in Cha-Am Hua-in in 2009, regionalisation of higher education profiles was high on the agenda,” Jaruwat Kiatiwongse, Director of International Network Development Office, Bangkok University and Rosalia Sciortino, Associate Professor on Population and Social Research, Mahidol University, stated in a commentary titled ‘Trans-ASEAN education can play a role in building a regional community.’

How can regionalisation help?

The idea is to enable graduates from one ASEAN country to be recruited by the employment sector in another ASEAN country. This will avoid a brain drain of skilled professionals in the region which will eventually aid in bolstering ASEAN’s economy.

These initiatives also pave the way for further collaboration and integration between universities in the region; enhancing the overall reputation of Asian universities compared to their competitors in the West or elsewhere in the world.

Based on a listing by QS World University Ranking, currently, only Singaporean and Malaysian universities are representing ASEAN at the forefront of Asian higher education institutions.

What are the measures being taken?

ASEAN as a regional bloc is presently fostering the regionalisation of higher education systems through system research, empowerment, and development of mechanisms to facilitate sharing and collaborations.

This is being done under the Southeast Asian Ministers of Education Organization – Regional Centre for Higher Education and Development (SEAMEO -RIHED) which has 5 objectives up its sleeves – empowerment of higher education institutions, cultivation of globalised human resources, development of harmonisation mechanisms, promotion of university social responsibility and sustainability as well as the advancement of knowledge frontiers in higher education management systems.

On the other hand, the individual governments of ASEAN countries are also increasing public investment to encourage the region’s growing knowledge sector.

For ASEAN to realise its full potential of regionalising its higher learning, it needs to ensure that students are obtaining a ‘glocalised’ education. Glocalisation means an international level education standard but in a localised area or channel for receiving education. More and more countries should take on this concept in order to push for better quality students in the region.

According to Jaruwat and Rosalia, the “glocalisation” of education also extends to virtual education. The availability and accessibility of digital platforms have redefined education in the region. It provides youth with unprecedented access to world education and universities without having to leave their home country or region.”

To enhance ASEAN’s aspirations and interests, it will be important to strengthen the linkages across the educational system so that the diverse member states will be able complement each other in shaping better equipped human resources for the region.

With the transition into the Fourth Industrial Revolution and the elimination of traditional labour skill sets, the region needs to work fast to achieve its goal of regionalisation so that no member state is left behind.