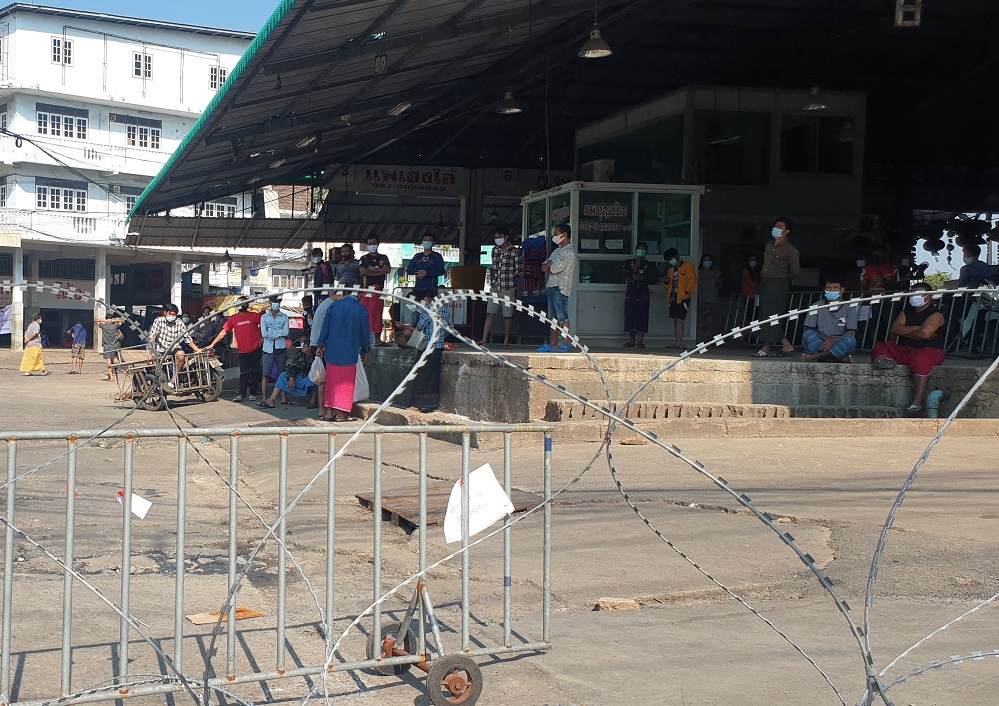 Migrant workers are seen behind razor wires on Dec. 21, 2020, at a seafood market that has been sealed off in Samut Sakhon province.

BANGKOK — Labor rights activists on Wednesday urged the government to rethink its policy of putting hundreds of migrant workers in the same residential buildings without segregating those who caught the virus from those who did not.

“They are stuck in apartments and without work,” Sompong Srakaew, director of the Labour Protection Network Foundation, said by phone. “Even grocery stores inside the quarantine buildings are charging more for eggs, nearly twice the normal price.”

At least 400 families of migrant workers from Myanmar are currently quarantined in crowded dormitories close to the Central Shrimp Market, the epicenter of the latest outbreak, Sompong said. They were put in five apartment buildings, each of them four-storey. None of the 3,000 occupants are allowed to leave the area.

Although the Red Cross and provincial authorities have been handing out food and basic necessities over the past few days, the supplies are still far from enough, Sompong said, adding that the workers are growing desperate to be locked down without having any salary.

“I may have to talk to the provincial business confederation to convince the employers to pay them salaries regardless of the situations,” the activist said. 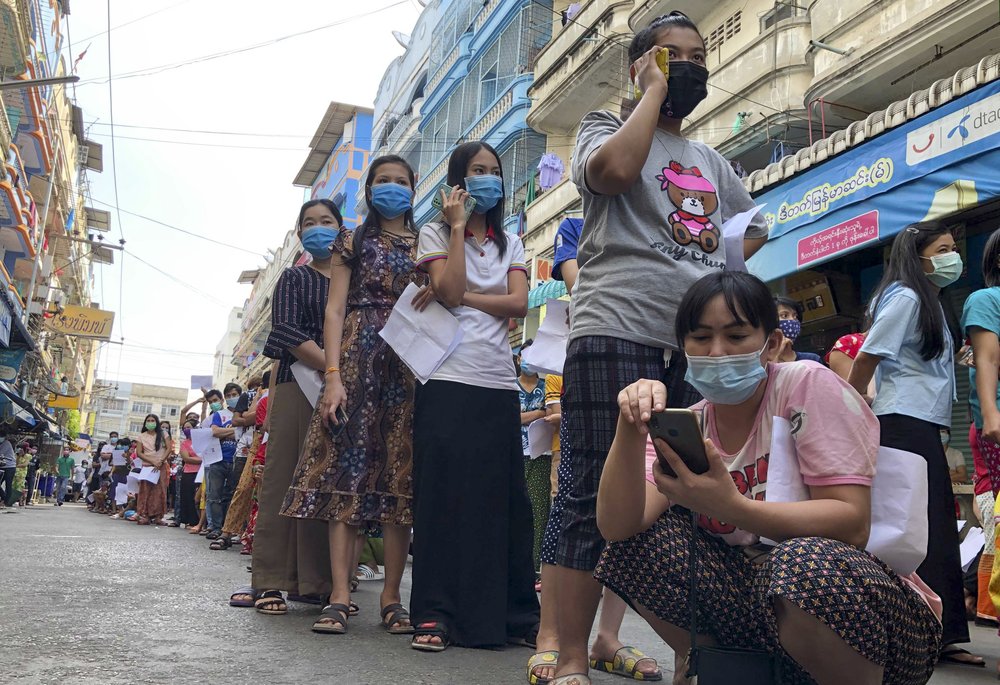 Adisorn Kerdmongkol, coordinator of Migrant Working Group, which has representatives with the migrant workers in 20 provinces, said he’s alarmed to discover that infected workers are forced to share their apartment buildings with non-infected workers.

“This is not appropriate, putting those infected and not infected together. It violates their human rights,” Adisorn said.

A news report by PPTV also said many workers don’t even know if they are infected at all – since they never received the lab test results.

“I don’t know which person I have to avoid, because I don’t know who’s infected, and who isn’t,” a migrant worker told the channel in a video call. “Right now, we don’t know the situation at all.”

Repeated calls to the provincial public health office to seek answers about the latest situation on the ground went unanswered as of press time.

But a spokesman of the government pandemic center insisted that the policy is appropriate because most of the infected migrant workers are young, strong, and asymptomatic. The workers will be taken to hospital only if they are found to be ill, spokesman Taweesin Wisanuyothin said on Sunday.

He later said on Wednesday that the government is building a field hospital with 100 beds to accommodate any migrant workers who may require medical attention.

A considerable segment of popular opinion also blames migrant workers who allegedly sneaked into Thailand for the new outbreak.

“This latest flare-up of infections in Samut Sakhon is primarily due to such illegal immigrants,” PM Prayut Chan-o-cha said Tuesday, without providing evidence.

A Myanmar interpreter who regularly assists migrant workers said on the phone Wednesday that he’s concerned about the growing backlash against the foreign workers that he saw on social media over the past few days.

“Nobody wants to be infected with COVID-19,” said the interpreter, who goes by the name of Jack. “Please don’t look at them in a negative light or with prejudice.” 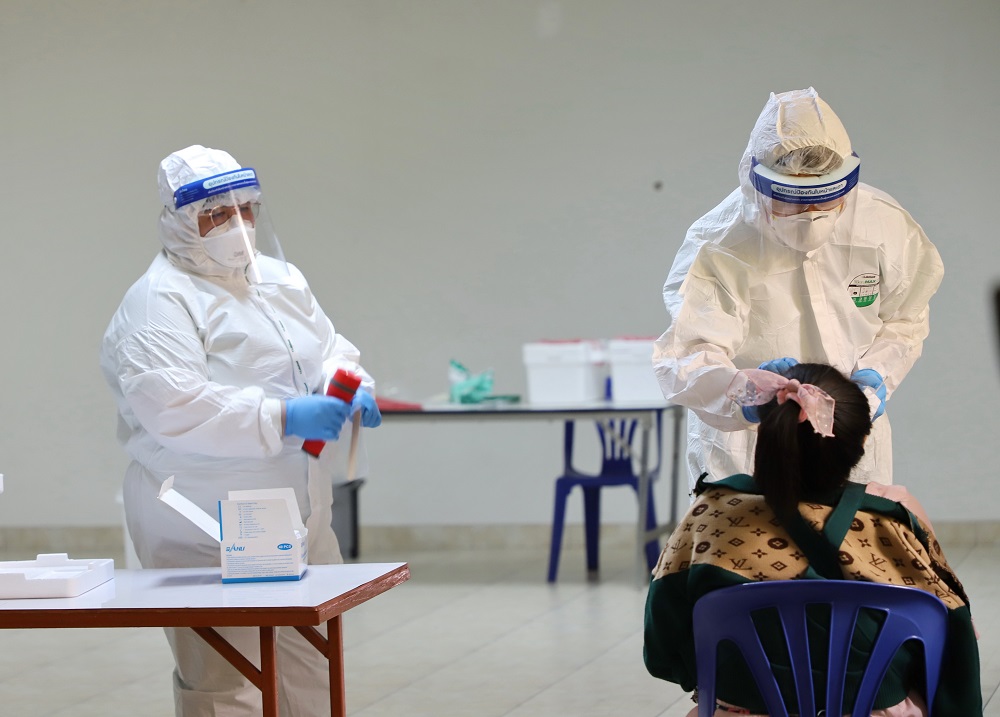 Health workers test migrant workers at a market in Pathum Thani province for coronavirus on Dec. 23, 2020.

Lia Rosalia Sciortino, a populations study lecturer at Mahidol University, said that the surge in infections could lead to stigmatization against Burmese migrant workers.

“It’s important to change the narrative in reporting and focus more on the locations of the outbreak without starting to blame individuals ethnic groups,” Sciortino said. “This is a disease so it should be treated as a public health issue, and not crimes.”

To their credits, several high-ranking officials have denounced the prejudice against Myanmar migrant workers.

“We’re brothers and sisters, no matter if they’re legal or not,” coronavirus response center spokesman Taweesin said. “We’re all on the same boat. They’re here to help drive our country’s economy. They’re helping us since Thais don’t do jobs they’re doing. Please understand and help take care of each other.” 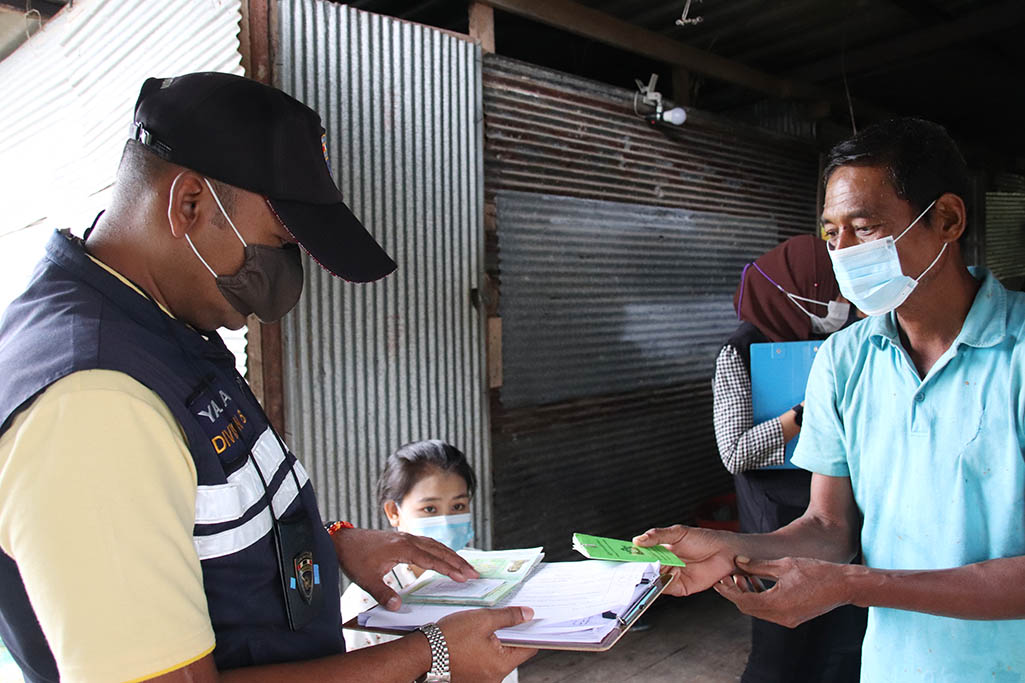 Taweesin said people wishing to donate food and other necessities to the Myanmar workers can do so by contacting the Samut Sakhon administration.

“The Myanmar people living in the Central Shrimp Market are not convicts. They are not criminal suspects. They did nothing wrong,” Samut Sakhon Gov. Veerasak Vijitsaengsri also said on Tuesday. “The important thing right now is we have to take care of them, to make sure they are safe.”

Jack, the Myanmar interpreter, suggested that the government could go further and grant an amnesty for undocumented migrant workers, in order to encourage them to step forward for the coronavirus tests.

The proposal is said to be under discussion; Labour Minister Suchart Chomklin said on Tuesday that he supports an idea of an amnesty, but it will be up to the government’s coronavirus center to make the final decision.

Migrant workers line up to have their details recorded by security officers in Phichit province on Dec. 23, 2020.

Not all migrant workers in the province are registered and therefore are not covered by unemployment assistance, while registered workers will find it very difficult to access compensation due to language barriers, said Adisorn, the activist from Migrant Working Group.

“Paperworks are in Thai and they are a hassle,” Adisorn said. “These people are losing their income for 14 days. The provincial authorities should consider stepping in to grant the fund to be used and afford these workers with half their daily wage instead.”