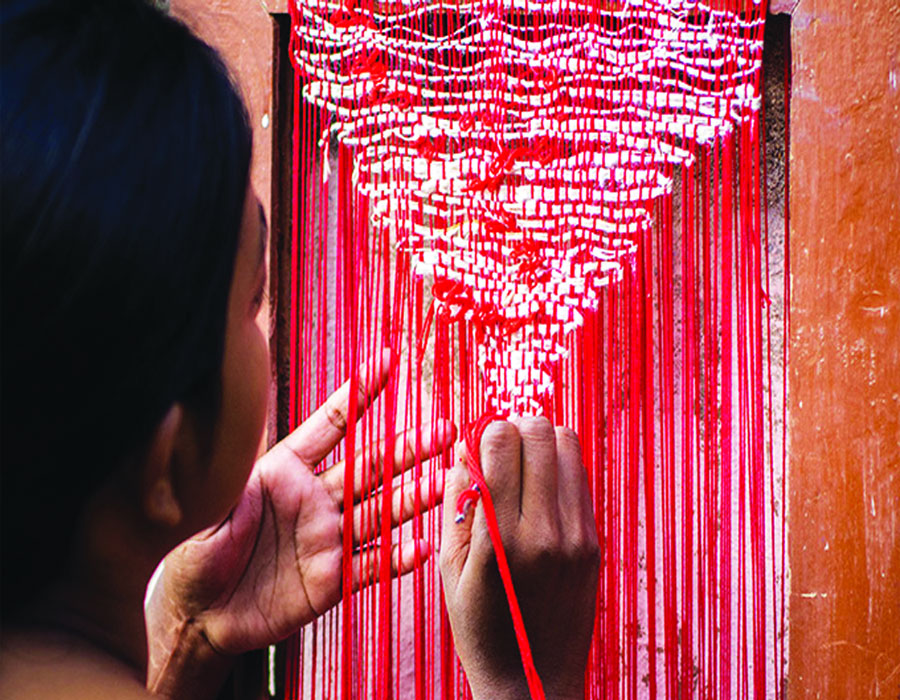 While they are essential for survival, textiles can also be an important artistic medium of expression, especially for those who have suffered violence, repression and discrimination

When the two daughters of Debra Munda, a resident of Sundergarh district, Odisha, died after a prolonged illness, he was convinced that black magic was at work there. He suspected that his neighbour’s wife was practising witchcraft and had cast an evil spell on his children. A couple of days later, he forced his way into the neighbour’s house after he had left for work and attacked the woman. After killing her and her four children with a crowbar, Munda and his accomplices threw their bodies into a nearby well.

This was not the first time that a woman was killed on the suspicion of indulging in witchcraft in Odisha. In fact, the steady rise in such attacks against women prompted the State to promulgate the Odisha Prevention of Witch-hunting Act in 2013. However, this does not appear to have struck fear in the hearts of perpetrators of such crimes. In 2019, at least four women were killed every month over suspicions of practising witchcraft, between January and August, according to official statistics. Not surprisingly, Odisha holds the dubious distinction of being the second-worst State in the country where suspicion of witchcraft is a prime reason for the high number of killings.

It was stories of such horrific violence that led to a churn within Pankaja Sethi. The Odisha-based textile designer and social anthropologist began exploring how she could project the vulnerability of women. Sethi decided to use her art to channelise her rage against injustice by raising awareness on the issue. So, when she was invited to reflect upon women’s rights, gender equity, fertility, contraception and violence against women through her work at the “Fabric of Being” textile exhibition, Sethi knew just what to create. The exhibition, that was held at the 2019 Nairobi Summit, commemorating 25 years of the International Conference on Population and Development (ICPD), became the ideal platform for her to showcase her campaign for gender justice by putting women and girls at the centre of development.

Sethi wanted her artwork to provoke conversations as to why women in India were oppressed and devalued in a society that worshiped goddesses as symbols of power and benefaction. She wanted to question why society religiously revered women as creators of life and power and yet had no qualms in snuffing out their lives. She wanted to raise consciousness about the fact that many women were killed not just on suspicions of being a witch but for numerous reasons. Millions of girls were killed in the womb because their families preferred a male child. Even if some girls were lucky to survive foeticide, they were at a risk of experiencing emotional, mental and sexual violence, which is perpetrated to control them by a deeply-entrenched patriarchy.

Sethi, therefore, chose to depict the uterus and womb as sources of power, representing women negotiating for space against forces that wanted to curb their freedom and make them invisible and voiceless. Aptly titled, The Flaming Womb, her textile artwork  used the popular Odisha ikat technique to weave three panels in red threads to represent the burning anger within women and their resistance against the diktats of a patriarchal society. Art should make a noise, says Sethi. This is why she is using an artistic medium of expression to tell stories of women and push for greater focus on creating an enabling environment for gender equality, sexual autonomy and freedom of choice. However, Sethi is not the only one to use textiles to tell stories of injustices committed against women. “I Never Ask For It,” a campaign by  Blank Noise, a Bengaluru-based volunteer-led project, too, aims to generate awareness on gender-based violence and end victim shaming/blaming by building testimonies of clothing.

This is because textiles are inextricably linked to the lives of people, particularly women. While they are essential for survival, textiles can also be an important artistic medium of expression, especially for those who have suffered violence, repression and discrimination.

Hence, Blank Noise’s testimonies are built by inviting women, girls and others to share the garment they wore when they experienced sexual violence. This is because most people across the world can recall the clothes they wore when they experienced any form of sexual violence, says Jasmeen Patheja, founder, Blank Noise. The garment bears the memory of it and is a witness to that experience.

The organisation, which has been working to tackle street harassment and change public attitudes towards sexual violence through creative initiatives since 2003, wants this campaign to be a process of healing; where survivors of violence feel heard and believed.

This is vitally important as claims by survivors of sexual violence are often dismissed or not taken seriously enough. As a recent study by the Commonwealth Human Rights Initiative (CHRI) and the Association for Advocacy and Legal Initiatives (AALI) reveals, rape survivors in Uttar Pradesh (UP) had to run from pillar to post to file First Information Reports (FIRs) because the police did not believe them. Titled Barriers in Accessing Justice, the report reveals how the UP police humiliate, discourage and harass women and girls protesting against sexual violence when they try to get a FIR registered.

The first step towards healing is to believe survivors instead of blaming them. Once the blaming stops, the process of collective responsibility can become possible. The Blank Noise team is hoping to achieve both these goals. It envisions that by 2023, there will be 10,000 garment testimonials exhibited at the India Gate complex in the national Capital, each one narrating its own powerful story.

Exhibitions on gender, sexuality, and women’s rights expressed through the medium of textile art are creative and powerful ways to send social messages. Pieces of cloth or yarn hanging from the ceiling or draped in an aesthetic manner can have the impact that the spoken word may not have, especially on issues considered prickly or stigmatic. Sethi’s work at the “Fabric of Being” exhibition certainly had the intended effect of drawing attention to the pressing need for sexual and reproductive health and rights for all.

Art is the key to social transformation, says Natalia Kanem, Executive Director of United Nations Population Fund and the brain behind the exhibition. This is why they chose 15 artists from Asia and Africa to present artworks featuring different kinds of textiles, including used clothes, to tell the story of women. Narrated from their culturally-diverse perspectives, these stories were expressed in different kinds of fabric and colours. Yet, they all shared a common thread in the way women, whether in Asia or Africa, negotiated for space and rights.

This was the first time that such an exhibition was an integral part of a global conference on reproductive rights, reveals Rosalia Sciortino Sumaryono, head of Southeast Asia Junction, a creative hub in Bangkok.  Sumaryono, who helped to conceptualise and organise the exhibition, contends that it is not always necessary to use words to bring about transformation. Art could give voice to the unspoken and unheard without using words just as it had done at the “Fabric of Being” exhibition.

Besides using her art to tell stories, Sethi has used her skill to build an agency of women and girls. When the Coronavirus pandemic hit marginalised crafts people, especially in villages in Odisha and unemployment led to hunger and poverty, Sethi provided livelihood opportunities to women and girls in weaver households by training them to stitch masks. Since then, these women have lifted their families out of poverty by stitching and supplying ikat masks to different parts of the State. History has shown that women hold societies together particularly at a time of crisis. They weave the tapestry of life to ensure the health, well-being and prosperity of their families, often at the cost of their own health and safety. Then, why must they die to give birth when most maternal deaths are preventable? Why must they be branded as witches, sexually abused and killed when they have an equal right to live a life without violence? Why must they bear the burden of family planning or be denied access to safe abortion services when reproductive rights of women are not up for negotiations? Most importantly, why must they be denied their right to be born merely because of their gender?

(The writer is a senior journalist)