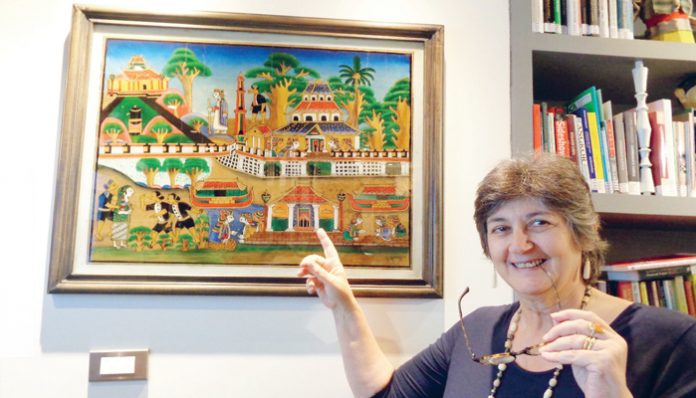 A glass painting of palace and mosque from the collection of Lia Sciortino. (Photo: IO/Tamalia Alisjahbana)

IO – In a reverse glass painting an im­age is painted on glass but later is viewed from the other side of the glass which often gives the painting more depth. Unfortunately, this makes it also, very difficult to repair or restore should the painting ever be damaged.

Dr Rosalia Sciortino Sumarjono is a cultural anthropologist and develop­ment sociologist by training and the founder of SEA Junction, an organiza­tion that aims to foster understanding and appreciation of Southeast Asia in all its realities and socio-cultur­al dimensions from arts and craft to the economy and development. A good-looking Italian woman from Palermo with a strong personality, Lia had al­ready since childhood a love for travel. At the age of 18 she travelled around the world and then stayed for a time in India.

Glass paintings are also often used to depict scenes from independence such as this Solo glass painting which shows the Punakawan raising the Indonesian flag. (Owner of painting: Tamalia Alisjahbana. Photo credits: Yoga/IO)

One of the things that Lia discov­ered was that in the area lived some of the most renown glass painters of Indonesia, painters such as Sastro Gambar for example who she later discovered was the most famous glass painter of the region. She found that many houses there had his paintings on display. And so, from there began what was to prove to be another new and life-long love for Lia namely, Indo­nesian reverse glass painting.

Another thing that Lia also found in Indonesia was her future husband the renown pencak silat (an Indo­nesian form of martial arts) master O’ong Sumarjono. She had first met him in the Netherlands where he was giving some martial arts demonstra­tions but it was in Jogjakarta that she fell in love with him. By then Lia was preparing her PhD thesis and she would go to Jogjakarta in order to tele­phone home to Italy. O’ong was from Bondowoso and also interested in art and culture and very knowledgeable about glass painting. He was also twice pencak silat World Champion and Southeast Asian Games Cham­pion and starred in a popular televi­sion series called Tutur Tinular which had many magical scenes with O’ong flying through the air. He was a martial arts actor and legendary figure to his fans. Later he became an international pen­cak silat coach as well as researcher and innovator. He was also the author of the influential and fundamental work on the subject, “Pencak Silat in the Indonesian Archipelago”. 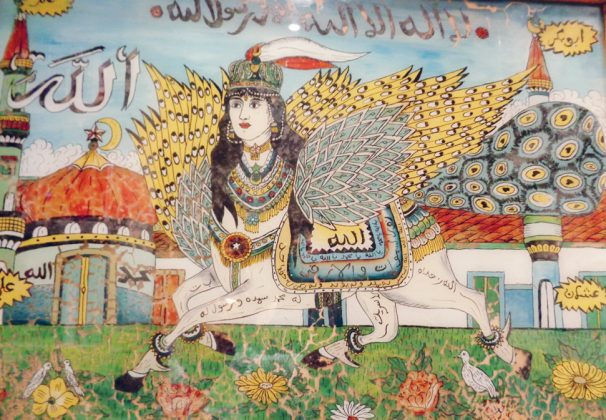 A glass painting of a bouraq made in East Java from the collection of Lia Sciortino which she suspects may have been produced in Madura or at least shows signs of Madura influence. Such paintings were used to ward off evil or bad luck. (Photo: IO/Tamalia Alisjahbana)

The result was that for most of her life aside from her own work and re­search this adventurous Italian lady was also drawn into a world of pencak silat and lukisan kaca or Indonesian reverse glass painting. Lia found that there is a lot of glass painting done in East Java and Madura where aside from being valued for its aesthetics it also has a history of being used to ward off evil and ill fortune from a home. This is especially true of paint­ings of bouraqs, mosques or Ar­abic calligraphy. Slowly, through the years Lia and O’ong built up a very large collection of reverse glass paint­ings.

The art of reverse glass painting appears to have originated in the Byzantine Empire and was used for sacred paintings such as paintings or icons of saints during the Middle Ages. Through the vehicle of trade this style of painting also spread to Italy especially Venice from where it influenced Italy’s Renaissance art. In the 18th century in Central Europe the Church and the nobility became enamored with glass painting and in the 19th century particularly in Austria, Bohemia, Slovakia and Ba­varia it became part of the traditional folk art.

A Solo glass painting depicting a scene from everyday life in the village i.e farmers working in the rice fields. (Photo credit: Yoga/IO)

German art historian and Raden Saleh expert, Werner Kraus writes in his paper Chinese Trade Art of Southeast Asia that the tradition of trade spreading the art of reverse glass painting continued into the 18th and 19th centuries bring­ing the art of glass painting to China where it developed as trade or export art especially in Canton and Macau. Here artists created furniture, painted china ware, oil and water color paint­ings on paper and canvass for mer­chants, sailors and sea captains to at first take home as souvenirs and then later when these items proved to be extremely popular, as trade or export items. They also began to produce glass paintings depicting subjects and styles favored by their European buy­ers. They created paintings of ships and port scenes, pictures of everyday life and portraits and frequently also copies of European prints. However, glass painting occupies a special po­sition within Chinese art for whilst primarily an export art it also had Imperial patronage. 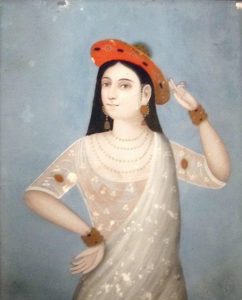 By the 18th century glass paint­ing had found its way to India via the China Trade. Indian painters espe­cially in south India began to portray Indian mythology and portraits of kings, nobles, courtesans and musi­cians. Chinese glass painters appear to have also settled along the coast in Gujarat which also became a centre for reverse glass painting. Meanwhile, Japan imported the art of reverse glass paintings from China during the late Edo period for Japanese art­ists were drawn to the vibrancy of colours in them and used glass art to depict both Japanese as well as foreign scenes.

Lia Sciortino wonders why the art of glass painting is not everywhere in Southeast Asia. “In Thailand,” she says, “it is only used in temples for astrological signs. In Cambodia glass paintings portray the life of Buddha, in Myanmar it is used to paint nats or spirits and the Buddha but there is no tradition of reverse glass paint­ing in Laos or the Philippines. Why is that?”

In this Solo glass painting the Punakawan are depicted as royal soldiers. (Photo: Yoga/IO)

“Central Javanese glass paintings traditionally depict scenery, every­day life, the Punakawan (Javanese clowns) or the loro blonyo (tradition­al Javanese carvings of a male and female figure in Javanese costume usually sitting cross-legged. They are symbols of fertility as manifesta­tions of Dewi Sri the harvest goddess) or wayangs and now there is often a modern element in the paintings. In East Java the colours are stronger and there are more paintings of Mus­lim heroes and historical anti-colonial figures such as Diponegoro,” explains Lia.

Cirebon glass paintings are re­nown for the use of the megamend­ung or darkening clouds motif which is a symbol of prosperity and also the sunyaragi or cliff motif. Figures in Cirebon paintings are usually wayang. Cirebon is also known for its calligraphic paintings.

Some glass paintings depict important or familiar places as does this Cirebon glass painting of the Keraton Kesepuhan. Note the characteristic megamendung (darkening clouds) motif as well as the sunyaragi cliff motif at the bottom of the front façade. (Photo: IO/Yoga Agusta)

Haryadi Umbara, a well-known Cirebon glass painter says, “It is not known pre­cisely when glass painting first came to Cirebon. Many people think that it originated from China and believe that it emerged under the influence of the Princess Ong Tien who was the fifth wife of the Sunan Gunung Jati (one of the nine guardians who spread Islam in Java. The Sunan Gunung Jati was from Cirebon). In Cirebon the village of Gegesik is known for its traditional glass painters and this is where Ras­tika, the most famous Cirebon glass painter came from. He has passed away but there are still well-known artists such as Astika Bahendi and Bahenda. I myself, come from the city of Cirebon and was taught by my fa­ther Prince Umbara. The name I use is Elang Yadi Wijaya Kusuma.”