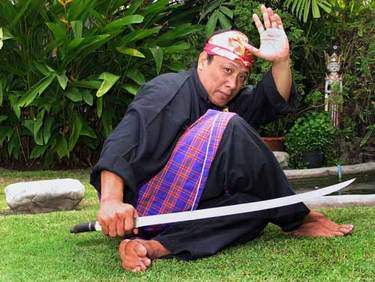 One of the great Pendekars (masters) of the silat world Bapak O’ong Maryono has moved on to the next world. Innaa Lillaahi Wa innaa Ilayhi Raaji’oon.. Verily from Allah do we come, and unto Him is our return. Alfatihah


Guru O’ong has done many favours to the entire silat community through his research and hard work in bringing Silat and its understanding to non malays. He will forever be remembered for his great service! Check his website for a glimpse of some of his research material and books. http://www.kpsnusantara.com
A brief biography of O’ong Maryono
O’ong was born on July 28, 1953 in Bondowoso, East Java, Indonesia. Actually, his real name is Sumaryono, but since childhood his friends gave him the name of ‘O’ong Maryono’ and he has maintained it until today.

Since he was 9 years old. O’ong learned pencak silat Madura and Bawean and practiced Kuntao. When pencak silat was introduced as a competitive sport in 1973, O’ong Maryono started his career as “fighter” winning the regional championships in the regency of Bondowoso. In the same year he moved to Jakarta where he also practiced karate, judo,aikido, ju jitsu and tae kwon do, besides training pencak silat in the school of the Keluarga Pencak Silat Nusantara with Master Mohamad Hadimulyo.

From 1979 until 1987 he won national and international competitions and was never defeated. Among his international achievements, he became twice world champion pencak silat in the free class in 1982 and 1984. He also won the first prize in the same category in the South East Asia Games XIV held in 1987 in Jakarta.

In between 1982 and 1985 O’ong also dominated national Taek Won Do competitions as champion in the heavy weight class. After he concluded his carrier as athlete because of age limits, O’ong worked as instructor in Brunei Darussalam, Holland, the Philippines, and more recently in Thailand.

O’ong also began a profession as freelance writer and researcher on martial arts. In 1998 he published a book entitled “Pencak Silat Merentang Waktu” (literally “Pencak Silat Stretched Across Time) on the socio-cultural aspects of pencak silat and its historical development which has received wide public recognition.