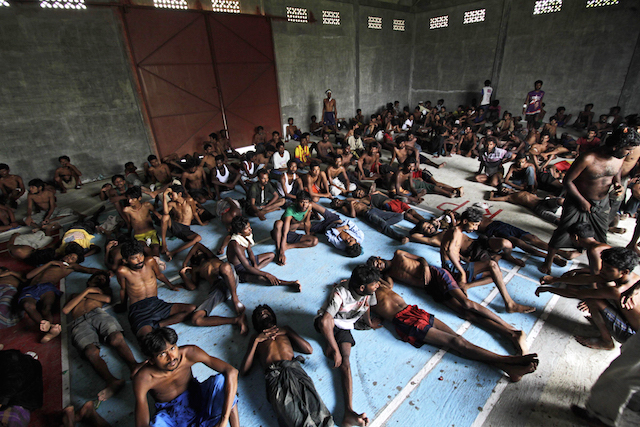 epa04749172 Rohingya and Bangladeshis men inside the refugees camp at Kuala Langsa, Aceh, Indonesia, 15 May 2015. According to reports, more than 600 Rohingya and Bangladeshis landed at Kuala Langsa Port, Aceh, Indonesia. Despite the risks, the Rohingya continue to leave Myanmar in large numbers, fleeing anti-Muslim violence and discrimination in the predominantly Buddhist country. The UN’s refugee body said that between January and March this year, almost 25,000 Rohingya and Bangladeshis boarded smugglers’ boats; double the number from the same period last year. More than 8,000 migrants were adrift off the coasts of Thailand, Malaysia and Indonesia, an IOM official said on 12 May 2015, posing a potential humanitarian crisis for the region’s governments.in Indonesia, Thailand, China, Sri Lanka. EPA/JUN HA

Immediate humanitarian concerns about the risk of death and disease may have been partly addressed by Indonesia and Malaysia’s agreement, under international pressure, to provide temporary shelter to an estimated 7,000 mainly Rohingyas, who have fled inter-communal tensions and state-sanctioned discrimination against the ethnic Muslim minority in Myanmar.

Thailand, engaged in a clampdown on human smuggling networks, has said it would not push back the Rohingyas’ boats but did not say it would take them in either.

The region remains far from a regional or international approach – let alone solution – to this cross-border crisis in a way that goes beyond security concerns.

But experts say that what is needed is a much larger approach that puts a stop to the large number of Rohingyas leaving Myanmar, stamps out the human smuggling networks that profit from their dangerous sea journeys, and puts an end to the deaths at sea and displacement of these people.

So far, Indonesia and Malaysia have said they will host the Rohingyas for just a year, after which the boat people – who they call “irregular migrants” rather than “refugees” – need to leave. They said this was on condition the international community provides assistance in this process.

The level of discomfort in facing this challenge remains quite high in a region that has made a habit of avoiding conflict and interference in “domestic” affairs. How might ASEAN, unused to resolving contentious and sensitive matters, respond to the longer-term issues raised by the Rohingya crisis and what experience might it draw on to tackle these?

The transnational “boat people” crisis does affect the atmosphere in the
“family” that proponents of the ASEAN Community and deeper integration like to call ASEAN.

“It is a tough situation but ASEAN is damned if it is silent…The leadership of Malaysia, Thailand, the Philippines and Indonesia should set the tone, even at the peril of being ‘damned’ by Myanmar,” said Jerald Joseph, chairman of the civil-society network called the ASEAN People’s Forum 2015.

“Like it or not, this has become a regional (and global) issue that deserves a transnational solution,” said Rosalia Sciortino, a professor at Mahidol and Chulalongkorn universities in Bangkok who teaches courses on regional integration. “ASEAN cannot afford to continue to avoid the situation since now it is at their shores.”

The crisis raises questions about the region’s ability to address issues usually tucked into the “non-interference” category, the depth of ASEAN members’ sentiments as one unit during the birth year of the ASEAN  Community, and how countries define pluralism, tolerance, ethnicity, citizenship, and nationhood in their own backyards.

Not a few ASEAN countries are multi-ethnic and have known communal strife, so the tensions in Myanmar are not of no concern to them. At the same time, Myanmar’s transition to political openness is something ASEAN likes to cite as an example that the “constructive engagement” policy does work.

Could this crisis push conflict-averse ASEAN to redefine its policy of constructive engagement among its member-nations?

“It is a complex situation with no instant solution that challenges ASEAN’s non-interference mantra and will eventually lead to negotiations among member states and with the wider international community,” Sciortino said. (To be concluded) – Rappler.com

Johanna Son is a journalist and editor who follows regional affairs and has been based in Bangkok for 15 years. She is also director for IPS Asia-Pacific news agency.