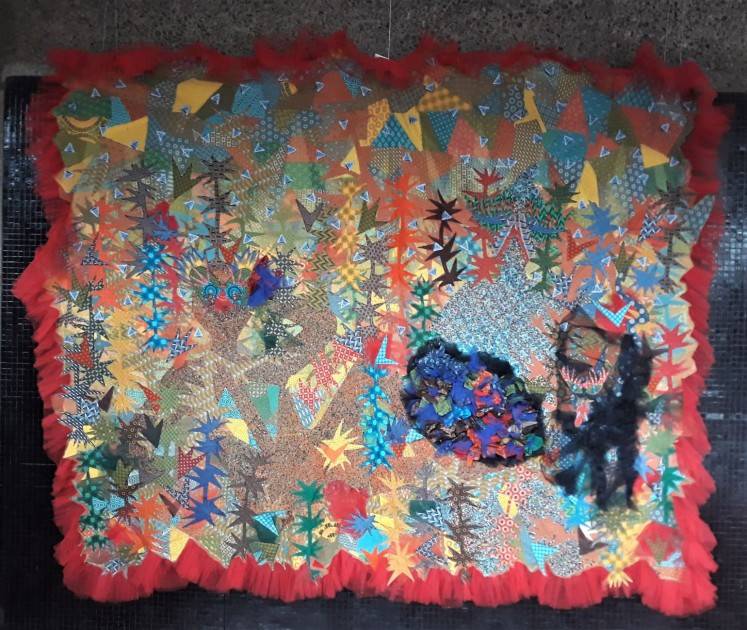 Up close: “Sis, You Betta Werk” by Siwa Mgoboza of South Africa is a colorful artwork inspired by “Olympia”, a painting by Edouard Manet that was controversial in its time.

Twenty-five years ago, the landmark International Conference on Population and Development (ICPD) in Cairo came out with the iconic declaration that the “world population is not a balance sheet but a rich tapestry of people’s lives”.

It came out with the conviction that women and girls belong squarely at the center of development; people first, with priority attention to women and girls.

Since then, much progress has been made, yet for many women and girls, the world envisioned during the groundbreaking event in Cairo is still far from reality and the newly opened Nairobi Summit aims to accelerate the promise made back then.

Alongside over 6,000 delegates attending the summit, renowned African and Asian artists, including from Indonesia, offer their interpretations of how textiles are inextricably linked to people’s lives through compelling artwork that speak to the summit’s themes.

The artwork, installations and performances feature different kinds of textiles, from handmade batik and crochet to khanga (vibrantly colored East African cloth), sarong and used cloths, creating a vibrant atmosphere at the Delegates’ Launch at the heart of the Kenyatta International Convention Center, which hosts the summit and the exhibition until Thursday.

Southeast Asia (SEA) Junction director Rosalia Sciortino Sumaryono said that through the exhibition, titled Fabric of Being, the summit’s ideas and concerns come to life in a variety of fabrics.

The exhibition is jointly organized by SEA Junction along with the United Nations Population Fund (UNFPA), the Trust for Indigenous Culture and Health, the Nest Collective and the Performance Collective.

Rosalia said in their culturally diverse perspectives that the artists invited viewers to discover multiple layers of meanings expressed in the forms, colors and technologies applied and the fabrics being used.

The symbolic richness of the exhibit, she added, revealed both the ceremonial and everyday use of textiles in defining people — and women in particular — as they move through their life cycles: negotiating sexuality, fertility, reproduction, relationships, childbirth, health, illness and death.

“Gender norms and roles, including those that shape the division of labor in the production of textiles, from spinning and weaving to tailoring, are challenged,” she explained.

“A fabric’s social function also emerges as the individual artwork and the exhibition as a whole, giving voice to the unspoken, advocating alternative visions and making public statements on crucial issues of diversity, equity and rights.”

Food for thought: “Born from the Same Womb” by Abdi Karya is one of the works on display at the Fabric of Being exhibition held on the sideline of the Nairobi Summit on in Nairobi, Kenya. (JP/Stevie Emilia)

Indonesian artist Abdi Karya displays her Born from the Same Womb installation, which is composed of swings and dolls made from sarongs, mostly from his birthplace Makassar in South Sulawesi.

Abdi said the sarong had become like his second body, something he was born with.

“It’s because, in my hometown, a newborn baby is always welcomed with a sarong,” he said in Nairobi.

He then explained how sarongs accompanied one’s entire life cycle, from birth, childhood, adolescence, adulthood, social and sexual interactions and marriage, in health and sickness and until his or her death.

“Even a sarong can be useful in a romantic situation like when a woman cannot express her feelings to a man, she can give him a sarong,” said the 37-year-old, who is currently living in Yogyakarta.

Abdi also meant for his artwork to call for pluralism and inclusiveness in the face of growing sectarianism, intolerance and identity politics.

“We come from the same womb,” he said.

Nia Flam and Agus Ismoyo showcased Fertility, a textile art installation that illustrates the cycles of life’s reproduction on Earth with 26 figurative pieces made in the medium of batik and tie-dye and visual and sound media. Agus (Indonesian) and Flam (American) have been working collaboratively to produce art textiles in Yogyakarta since 1985.

They explain in the catalog that the installation is inspired by the ancient Javanese text Agastyaparwa, which associates ants with fertility and describes them as a powerful symbol of how the cycles of human reproduction are intertwined with the environment.

At the core of the installation, there are pieces representing an ant house, the life of ants and the elements of water, earth and air. The installation also includes four sarongs, depicting the seen and unseen aspects of our existence as well as the four directions of the earth.

One more sarong with soft sculptures shows the stages of a woman’s life first as a young girl, then a woman and finally an aged person (or grandmother).

Indian artist Pankaja’s textile artwork The Flaming Womb examines the gap between the symbolic and power attributes of womanhood and the role and conditions of women as dictated by a patriarchal society, while Signs of the Now by Jose Hendo of Uganda features handwoven bark cloth and organic cotton.