Making Development A Story within ASEAN

SINGAPORE – How to create space in South-east Asian media for reporting on social and development issues in the context of Association of South-east Asian Nations (ASEAN) regionalism was the focus of an experts’ meeting organised in early November by IPS Asia-Pacific, with the ASEAN Studies Centre as co-organiser.

Held at the Institute of South-east Asian Studies (ISEAS) in Singapore, the meeting saw a healthy exchange of views among senior journalists and editors from within the region, foreign policy experts, researchers and writers about how to get more critical, in-depth reportage around ASEAN given that much of the news coverage around it focuses on high-profile summits and gravitates toward state voices, and as its goal of an ASEAN Community in 2015 nears.

The highlight of the meeting was the presentation of the initial findings of a content analysis study, done by IPS Asia-Pacific and coordinated by IPS Asia-Pacific Director Johanna Son, on how newspapers in the 10 ASEAN countries cover stories related to the regional grouping.

This study, along with the experts’ meeting, marks the first set of activities in IPS Asia-Pacific’s programme called ‘Reporting Development in ASEAN’, which it is carrying out with the support of the International Development Research Centre (IDRC). Its regional director, Dr Rosalia Sciortino, gave opening remarks, along with ASEAN Studies Centre head Rodolfo Severino, at the Nov. 1 – 2, 2011 meeting. 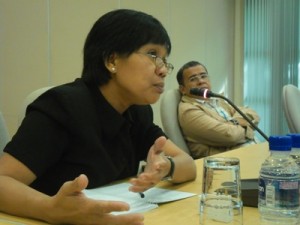 Written by Prof. Ubonrat Siriyusavak, the content analysis study points to the fact that most of the ASEAN-related stories are tied to event-driven news and very little features, analysis and investigate reports; are often presented in spot news format; and often around the ‘political’ side of ASEAN activities, summits or meetings. There is however also a sizeable amount of coverage around the subject of economic integration.

The challenges in telling development stories within reportage on ASEAN also involves the fact that for some media organisations, development issues do not rank among the most attractive stories for readers or bring in market revenue. Some senior journalists at the meeting also pointed out that ASEAN’s habit of ‘secrecy’ and preferring to share little with the media, apart from its labyrinth of meetings and documents, add to the difficulty – as well as challenge – for South-east Asian journalists to pursue.

Often, “readers want to read light news and don’t really care about development stories, including those of other countries in the region”, explained Kornelius Purba, senior managing editor of the English-language daily ‘Jakarta Post’. Many young journalists are also not as interested in ASEAN, he added.

In countries like the Philippines, the media often see ASEAN as “largely a debating session between diplomats”, pointed out Malou Mangahas, executive director of the Philippine Centre for

Investigative Journalism (PCIJ). “The ASEAN image is pretty much trite. Stories of conflict resonate more among readers, but it’s something ASEAN does not want to focus on, given its concern of presenting a solid ASEAN consensus,” she said. It does not help that ASEAN is “full of lofty promises that become unfulfilled promises once media test vis-à-vis issues on the ground”.

Looking at the bigger picture, ASEAN Studies Centre’s Severino said that the challenges in getting more serious, critical development-oriented reporting on ASEAN lie in the fact that development is often seen as “boring” and that reporting on issues around the ASEAN organisation takes a lot of work and expertise, so that “oversimplification (of issues) leads to inaccurate reporting”.

These discussions, as well as the content analysis findings, provided the basic information for exchanging ideas about the next part of the ‘Reporting Development in ASEAN’ programme, which is the media fellowship scheme for South-east Asian journalists to be held in 2012.

Among the areas of focus discussed at the meeting were the need for stories to relate ASEAN policy issues and decisions to the everyday lives of the community it aims to serve, to include the voices of these communities and other sources apart from diplomats and state representatives, and to study closely realistic expectations of ASEAN as well as the organisation’s documents as part of investigative, in-depth reportage. (END/IPSAP)