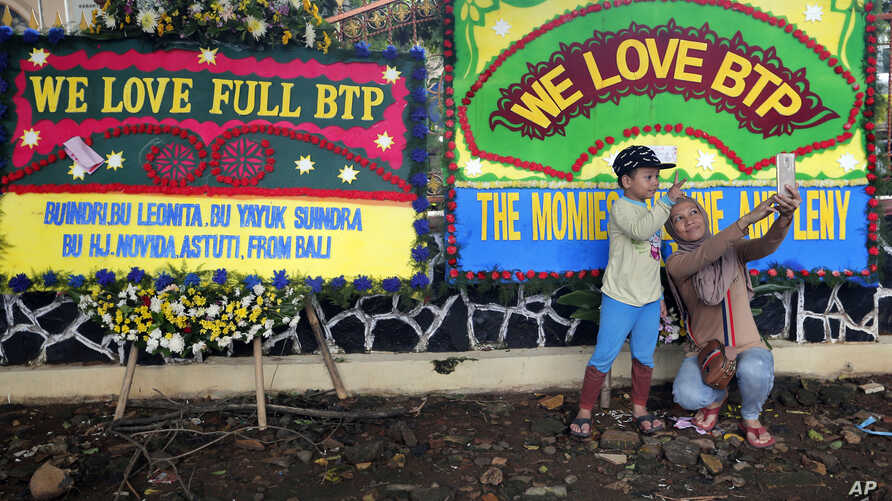 Supporters of former Jakarta Gov. Basuki “Ahok” Tjahaja Purnama, take selfie in front of wreaths sent by well-wishers outside a police prison in Depok, Indonesia, Thursday, Jan. 24, 2019. The polarizing Christian politician whose campaign comments ignited protests that were the largest in Muslim-majority Indonesia in years was freed Thursday after serving nearly two years in prison for blasphemy.(AP Photo/Tatan Syuflana)

WASHINGTON – The release of Basuki Tjahaja Purnama, the former governor of Jakarta, after serving most of a two-year sentence for blasphemy, is focusing attention on the law that brought down the popular politician best known as Ahok.

Ahok, an ethnic Chinese Christian in a Muslim-majority nation, was found guilty of blasphemy by the North Jakarta District Court, May 9, 2017, a month after he lost his re-election bid to Anies Baswedan, who espouses a strict interpretation of Islam.

The governorship of Jakarta is widely seen as a steppingstone to higher, nationwide office. The current president, Joko Widodo, served as governor before Ahok. That Ahok’s campaign became a flash point in the blasphemy debate highlighted the religious tension in the world’s most populous Muslim nation, as does Widodo’s selection of a cleric, Maruf Amin, as his running mate in his re-election bid. Widodo’s opponent, former Gen. Prabowo Subianto, is stressing his ties to Islamists in the run-up to the April 8-17 vote.

Ahok’s troubles began on a campaign stop, Sept. 27, 2016, when he said people should not vote for a candidate based on religious beliefs, a criticism of the notion that Muslims cannot have a leader who is not also Muslim. A video of his remarks appeared on social media, edited to suggest Ahok was insulting the Quran, triggering violent street protests by fundamentalists.

Ahok lost the April 2017 vote to Baswedan. After a high-profile trial, Ahok was convicted May 9, 2017, and later that year, on Nov. 14, a district court in West Java found Buni Yani guilty of editing Ahok’s remarks and sentenced him to 1½ years in prison. He has yet to serve his time and is working on Subianto’s election campaign, according to The Washington Post.

“Indonesia’s 1945 constitution explicitly guarantees freedom of religion, as does the International Covenant on Civil and Political Rights, to which Indonesia is a party,” according to a 2018 Human Rights Watch (HRW) article.

“However, the Indonesian government has long enacted, and in recent years strengthened, legislation and regulations that have subjected minority religions to official discrimination. This has made minority groups extremely vulnerable to members of the majority community who take the law into their own hands,” the article said. 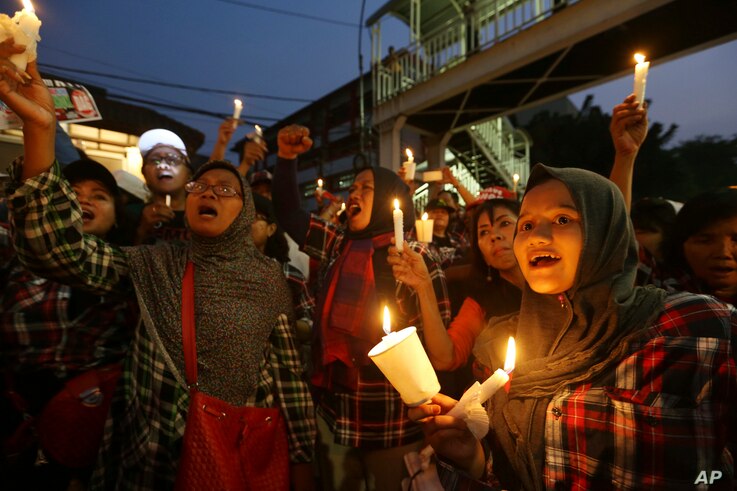 FILE – Supporters of Jakarta Gov. Basuki “Ahok” Tjahaja Purnama who is imprisoned for blaspheming Islam shout slogans during a protest outside the High Court in Jakarta, Indonesia, May 16, 2017.

Blasphemy is defined in Article 156a of Indonesia’s 1965 criminal code as “abusing or staining a religion adhered to in Indonesia” when the act is committed with “the intention to prevent a person to adhere to any religion based on belief of the almighty God,” according to Rafiqa Qurrata A’yun, a lecturer in the Faculty of Law at the University of Indonesia writing in Inside Indonesia.

Among those minorities, other than Ahok, the person who has attracted the most attention is Meiliana, a 44-year-old Chinese Buddhist, who was found guilty of insulting Islam after asking her neighborhood mosque in 2016 to lower the volume of its sound system used in the call to prayer. She said it hurt her ears.

The mobs responding to Meiliana’s request for a quieter azan ransacked at least 14 Buddhist temples in Tanjung Balai, North Sumatra, as ethnic Chinese fled the area. She was jailed for 18 months.

Other cases included the dismissal in July by the Supreme Court of a challenge to the blasphemy law by nine members of the Ahmadiyya religious minority who “who sought the law’s abolition on the basis that it fuels discrimination and abuse of religious minorities,” according to HRW.

The Ahmadiyya sect was founded by Mirza Ghulam Ahmad more than a century ago in what is today the Indian part of Punjab. He claimed to be the incarnation of a Messiah promised in Islamic holy texts. That challenged the mainstream Muslim belief that Muhammad is Islam’s last and final prophet.

Early last year, the Jayapura Churches Association, in the capital of Indonesia’s Papua province, issued a stark ultimatum to municipal authorities: Dismantle the minaret of the city’s al-Aqsa Mosque within 14 days or the group would “take their own action.” The group took no action, however, after the two weeks passed.

On May 19, 2018, militant Islamists attacked and damaged eight Ahmadiyya houses on Lombok Island, forcing 24 people from seven families to seek refuge at the East Lombok police precinct, according to HRW.

Based on research done by Jakarta’s Setara Institute, which tracks religious freedom in Indonesia, from 1965 to 2017 there were 97 cases of blasphemy, 88 of those since 1998. Of those, 22 have occurred since Widodo took office, according to HRW.

Melissa Crouch, an associate professor at the law school at the University of New South Wales in Australia, told the Sydney Morning Herald that the blasphemy law had been “weaponized.”

“It’s called the ‘Ahok effect,’ the use of the blasphemy law to target political opponents,” said Crouch, who is an expert on Indonesia’s blasphemy laws.

The U.S. State Department’s Annual Report on Religious Freedom from 2017 referred to the problem of conviction for blasphemy and defamation of religion, and the HRW Annual Report for 2018 described Indonesia’s blasphemy law as “dangerously ambiguous.”

The senior HRW researcher in Indonesia, Andreas Harsono, told VOA that he “regretted” that Widodo “did not use the enormous political support he had to overcome intolerance.”

Harsono added, “It is necessary to continue public education so that everyone is aware of the existence of controversial laws such as the blasphemy law.” 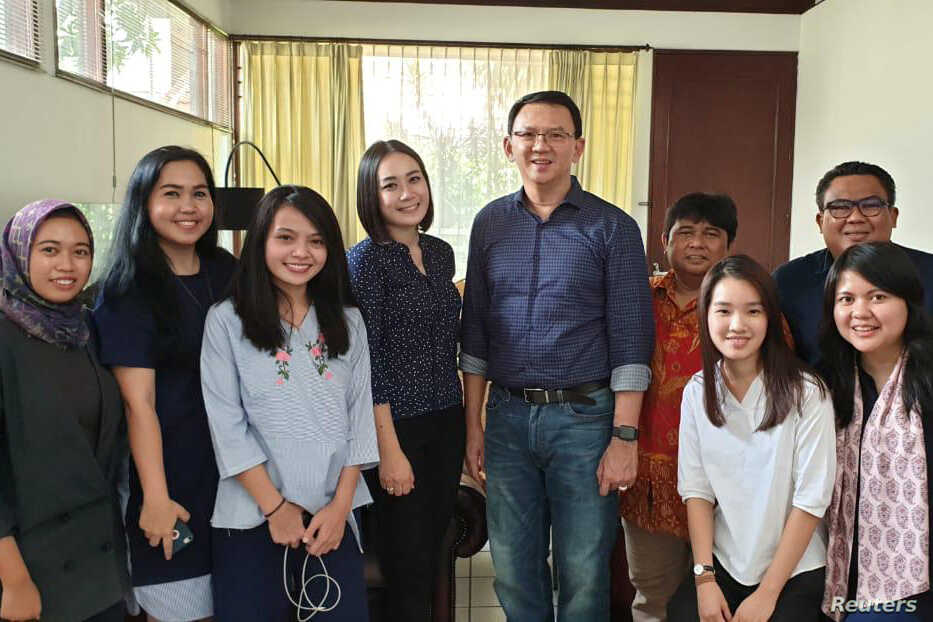 Former Jakarta Gov. Basuki “Ahok” Tjahaja Purnama poses with his relatives after being released from prison in Jakarta, Indonesia, Jan. 24, 2019.

Anthropologist and founder of SEA Junction in Bangkok, Dr. Rosalia Sciortino Sumaryono, echoed Harsono’s remarks. She said that in many cases, where minorities are victims because of the politicization of religion or ethnic distrust fueled by nationalism, too many people in the majority keep quiet out of fear.

“We may be afraid to face a war of ideas, but it is time to speak out and claim our public spaces,” she said. “This is an urgent need, because otherwise such behavior will continue to spread and eventually we will be cornered. Many victims will fall.”