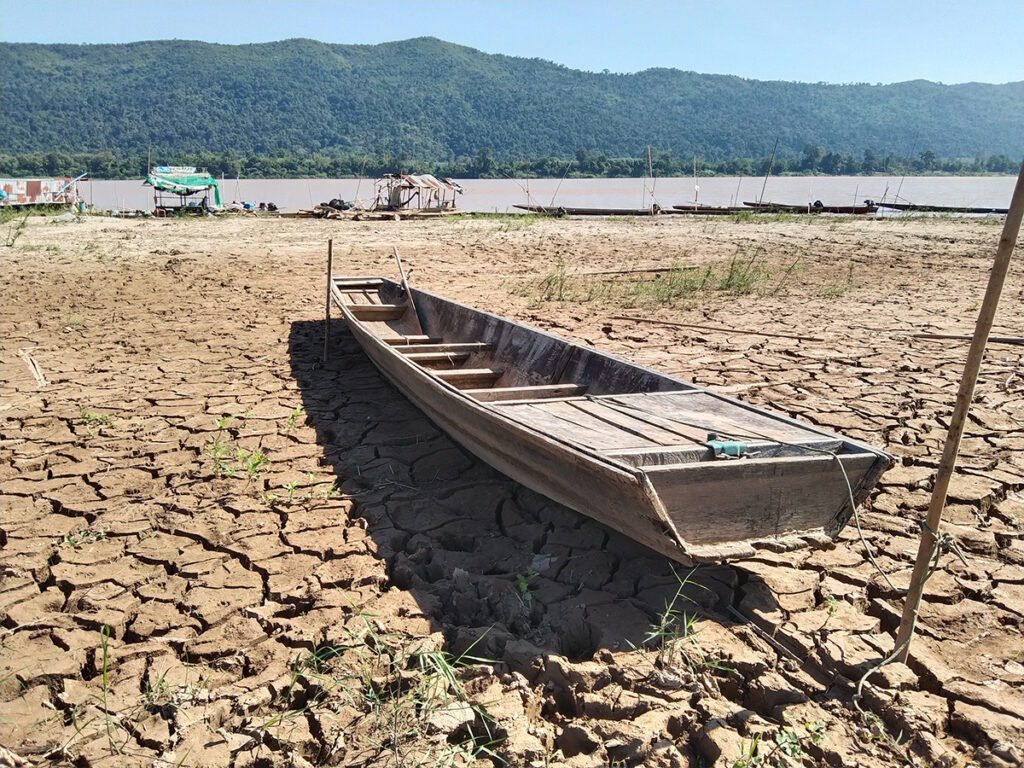 Among photographs telling the struggle for survival of the Mekong River, its natural habitat, and riparian communities at the Mekong is Blue and Dried photo exhibition, runs until tomorrow, warning resonated for urgent bottom-up action to expose and counter economic interests and government inaction

The color change from murky brown to aquamarine and increased drop of water levels have reportedly happened since late 2019, reflecting the visible impact of dam operations and other infrastructural developments on the Mekong River and its tributaries.

Amid rising concerns, there are questions about the pro-growth development models adopted and cooperation mechanisms to share data, regulate water uses and mitigate impacts.

To better understand the actors at play in different levels and what strategies are being employed to counter environmental degradation or at least ameliorate its impacts, a panel discussion was held in the mid of this month at the launch of the photo exhibition “The Mekong is Blue and Dried” by SEA Junction, Bangkok Tribune, Thai Society of Environmental Journalists, with partial support from the Samdhana Institute, attended by an attentive and concerned crowd. 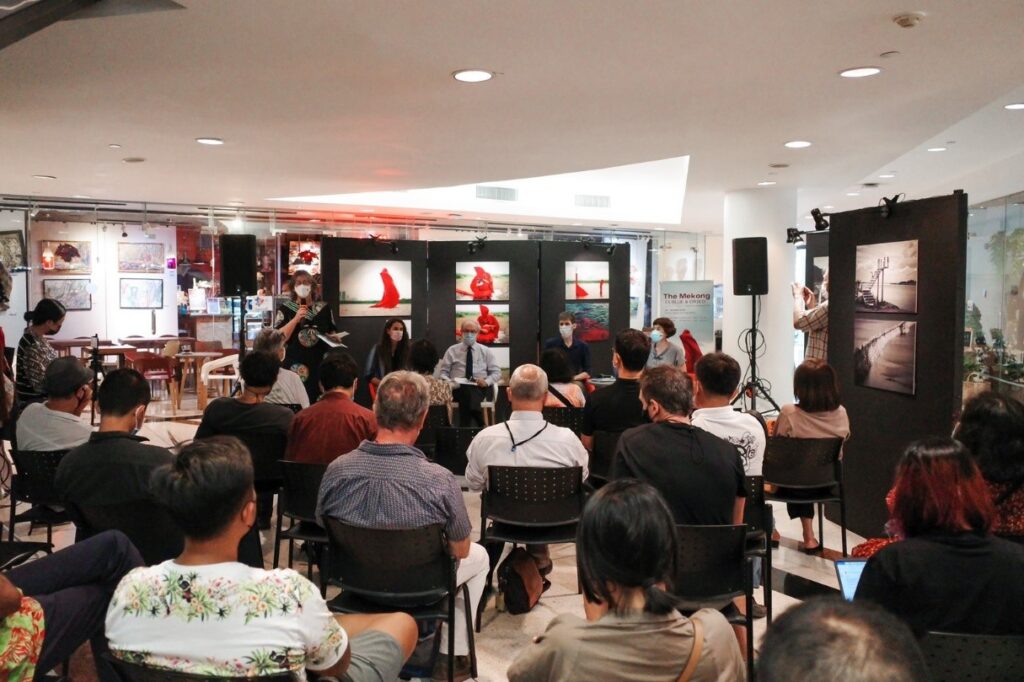 Among the debates and lack of clarity on why the Mekong has turned blue and dried, the first panel speaker, Carl Middleton, Director of the Center for Social Development Studies in the Faculty of Political Science, Chulalongkorn University highlighted the need for data sharing in regional water governance as the foundation for cross-border cooperation.

Although more hydrological and water data has been shared recently and under pressure China has pledged to increase data sharing in late 2020, the quantity and quality are still limited. Dr. Middleton pointed. At the moment, how data is shared has been partial, selective, conditional and thus political, he elaborated.

The U.S. funded Mekong Dam Monitor was launched to track conditions along the River. But then, amid the intense geopolitics in the region and the tensions between US and China, data can be politicized and that can lead to contestation, instead of more cooperation or resolution of the issue, Dr Middleton remarked.

What’s being shared is the scientific data, that is important, but not necessarily connected to the impacts experienced by the people on the ground, Dr. Middleton pointed.

Such technical data, he said, is shared and informed primarily at state level but the challenge is how people’s voices can be heard in decision-making process, he remarked.

Premrudee Daoroung, an environmental campaigner at Laos Dam Investment Monitor, also added that the data is in the hands of those in power and governmental mechanisms but has neither been released to the public, nor used to protect the river.

The attention should be given to the accountability of dam projects, the public and private investors from within and from outside the region, and the consequences impacted to millions of people who depend for their livelihood on the biodiversity of the River and animals dwelling in the Mekong riverbank, Ms. Premrudee remarked.

This failure of regional governance and institutional mechanisms is particularly salient when we take into account that, as Anthony Zola, an independent risk assessment researcher in development projects in the region explained, there is a whole array of social and environmental safeguards.

Notwithstanding differences in details, they all aim to prevent and address the risk of impacts caused by dams to the environment and to society, and especially riparian communities, he further noted.

These are adopted and applied voluntarily by financial institutions as they loan the money for development project but are keen to do it responsibly. The investors will also be audited to ensure the compliance of policies, he said.

There are also certain principles to be followed in the business sector, for example, the International Hydropower Association whose members include many dam constructions companies such as those building dams in Xayaburi, Luang Prabang and Don Sahong, he cited.

Considering, how many of the development projects are being audited, the questions that arises, as posed by Rosalia Sciortino Founder and Executive Director of SEA Junction who moderated the discussion, is in how far dam construction take into account social and environmental safeguards in reality (is audit pro-forma?) ,and whether dams as such should be considered not to meet principles of environmental sustainability and social well-being. 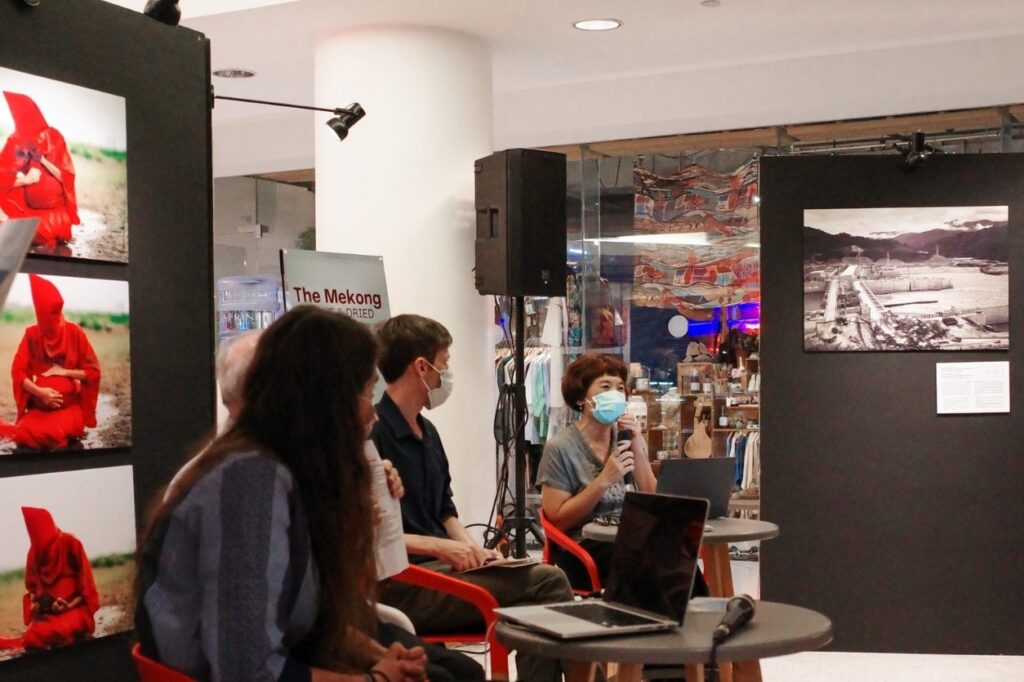 The discussion also showed the complexity of interests and actors at play from states and investors, to media, civil society and communities. Ms. Premrudee provided a quick review of the Mekong River Commission (MRC) as a key player at the inter-governmental level.

She cited the MRC’s report of Strategic Environmental Assessment in 2010, which says clearly that if 12 proposed dams along the lower Mekong mainstream was built, it would on one hand only give approximately 10% more energy security to lower Mekong basin countries. On another hand, they would rather destroy large area in the lower Mekong, particularly, Tonle Sap and Mekong Delta.

Then, 10 years after in 2020, the recent report shows the severe changes as predicted even though there’re only 12 dams upstream in China and 2 dams on lower Mekong mainstream.

More recently, last year, MRC released a concern statement on the blue and dried Mekong. This has caused criticism from China and Ms. Premrudee took this as “probably the sign that MRC walking on the right track after many years”.

The media themselves also play a crucial role in recording and sharing information, presenting the stories and widening public attention on the Mekong River.

Laure Siegel, a freelance journalist, shared her direct experiences working on the issue. She  said the reporting task is not easy.

In different locations, she encountered many challenges such as lack of official accessible data, secrecy and control of authority, and lack of civic space for affected communities to speak freely. The journalists and activists are also at risk of abuses and even disappearance and death, Ms. Siegel pointed.

As knowledge is power, Ms. Siegel sees the importance of archives carried out by the media to document changes and record of what has been going on.

However, it’s not only the media who play such role in documentation, but also people living in the basin, who can write their own history, the journalist pointed.

The participants agreed that communities themselves in collaboration with civil society groups and networks have been the most consistent in advocating for environmental sustainability.

But Dr. Rosalia said while people have lots of expectations and hopes for civil society to serve the common good, but in the last decade this sector in the region has been systematically undermined financially as well as by the shrinking of civil and political space.

She remarked that mechanisms also need to be created for people’s representation and participation in decision making processes at national and regional level as the talk was wrapped.

“The Mekong is Blue and Dried” is one of the attempts to document changes in recent years and provide another channel for people to raise their voices, share first-hand experiences and speak out opinions as well as insert policy recommendations.

The exhibition displays beautiful but tragic photos of the Mekong River curated from SEA Junction’s online storytelling initiative, of which the full stories are available on its website.

The photo exhibition will be on view until tomorrow at Corner Space, 1st Floor, Bangkok Art and Culture Center (BACC).